A two storey building in grey granite designed by Vincent Craig in 1894 for Dunville & Co. Ltd. Operated as the head office of the distillery company until the firm entered into liquidation in 1936.

The building was converted by Samuel Stevenson & Sons for the Belfast Savings Bank in 1938. The Bank continued to occupy the building until the 1980s. The First Trust Bank occupied the building during the early 1990s .

Birchsilver Ltd submitted a planning application (Z/2003/0572/F) in March 2003 proposing to refurbish the building, change the use to public house, extend the rear elevation and alter the front elevation. The application was approved in May 2003. McNally Design managed the redevelopment of the building into a bar / restaurant venue known as Cafe Vauderville. The new venue opened in 2004.

The building was placed on the market in June 2016, together with the associated liquor licence and internal fixtures and fittings, with a guide price of £3.5m.

Revolution Bars Group announced in March 2017 that a ‘cuban inspired’ cocktail bar and restaurant – Revoluciòn de Cuba – will open within the building during summer 2017. 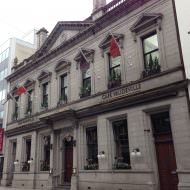 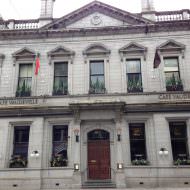