When completed c.1910 the current building formed part of a larger linen warehouse complex occupied by the Bruce Street Weaving Company and Robert McBride & Co. Ltd (had traded from 11-15 Bruce St since at least the 1870s).

Robert McBride & Co. Ltd and the Ulster Manufacturing Co. Ltd continued to trade from the building until at least the 1960s.

The building is one of only two that remain following clearance of Bruce Street in 1986 to facilitate the construction of the inner ring road.

The vacant building was marketed by Cushman & Wakefield in 2018.

Andras House and Philip Rodgers Design submitted a planning application (LA04/2018/2170/F) in August 2018 proposing to change the use of the vacant building from retail to office use. The application was approved in December 2018.

Andras House and Philip Rodgers Design submitted a planning application (LA04/2019/2541/F) in October 2019 proposing to re-instate windows to rear and side elevations and add two metal canopies to entrance doors.

McCormack Demolition completed the internal strip-out of the building during December 2019 – January 2020. 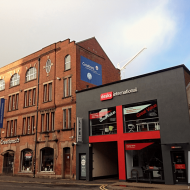