The two-storey section at Victoria Street was occupied by the Belfast Banking Co. Markets Branch and the three-storey section at Gloucester Street comprised the Bank Managers House. A Bank Manager resided in the rear section until the 1950s and the bank branch at Victoria Street closed in the 1970s. The building was B1 listed in June 1979 (HB26/50/047) whilst vacant.

Andrew Mulvenna Hair acquired the property in June 2017 and propose to refurbish the building and open a hair salon by March 2018. 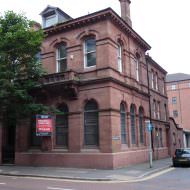