Previously on the site was a two-storey building built 1838 – 40 for the Belfast Anacreontic Society (who had previously met at the Assembly Rooms, Commercial Buildings and at the Belfast Savings Bank, King Street). The Society had advertised for designs for their new building at May Street and the designs of Mr Millar were accepted and he was paid £21. To save money the Society asked the unsuccessful Thomas Jackson to prepare revised plans that were built by Mr Lundy for £3,460.

The Hall opened on 26 March 1840 and could accommodate up to 600 people. To produce extra income the basement was let out as a wine cellar for a number of years. The Church of Ireland Young Men’s Society took the Hall over in 1882, renamed it the Victoria Memorial Hall and used it as a gymnasium.

In 1916 the hall was acquired for use as a church until 1977 when the building was vacated. The building was demolished in July 1983 and the site was used as a surface car park until redevelopment in 1990 as the current office building by Greeves Kelly Partnership for Keeson Properties Ltd. 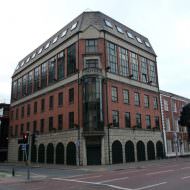 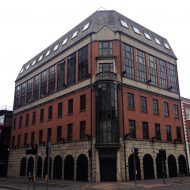