The site at 13 Kent Street, 12- 16 Library Street and Union Street was previously occupied by a four-storey warehouse building constructed c1920. A betting shop managed by S.P. Graham operated at 12-14 Library Street since at least 1975.

The Library Square apartment development was completed in 2006.

The BBC reported in November 2019 that over 50 owners of apartments are taking class action over alleged flaws in construction of the building. The BBC reported that the owners have been seeking compensation from the builders and engineers since 2016. The High Court heard in November 2019 that the case is close to a resolution but a dispute remains over whether the building can be economically repaired. 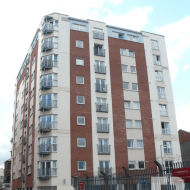 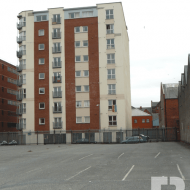