A three-storey neo-Georgian brown brick building, with basement and attic, situated between Botanic Avenue and Bradbury Place and fronting onto Shaftesbury Square. Built by the Northern Bank during the 1960s.

Previously on this site was a three storey building built 1868 by Elizabeth and William Munce. Andrew Munce, poulterer had a shop unit at ground floor until c1900 when Ferris Bros., drapers and outfitters took over the ground floor shop unit.

The Northern Banking Company Ltd acquired the building from Elizabeth & William Munce in September 1916 and opened a bank branch under the supervision of branch manager Mr C.V.B. Rylski. The Northern Bank rebuilt the building during the 1960s and continued to operate from the current building until closing in June 2013. 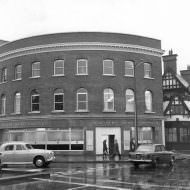