No.116 is a two storey hospital building designed by W. J. Barre for Lady Johnson, in memory of her father Mr Thomas Hughes. Built by Mssrs. Fulton on a site offered by Rev. H. T. Cooke at a cost of £2,230, donated from Lady Johnson and her husband Sir. William Johnson. The hospital opened on 1st January 1868 and was later extended by Blackwood & Jury in c1927.

The Belfast Ophthalmic Institution operated from the hospital from construction until relocating to the Royal Victoria Hospital in 1946. Following the Second World War the hospital was run by the Northern Ireland Hospitals Authority and in 1969 it was renamed ‘Shaftsbury Square Hospital’. The Belfast Health & Social Care Trust closed the building in 2010 and later sold the building along with nos.118-120 Great Victoria Street.

Nos.118-120 comprises 2no. three storey properties built c1855-1860 as part of a terrace of residential properties. They were amalgamated into the former Shaftesbury Square Hospital building during the later part of the 20th century. 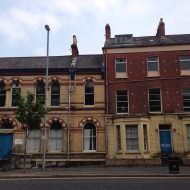 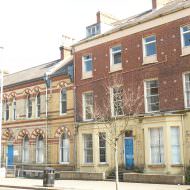 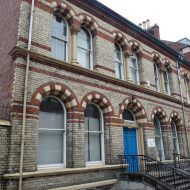