A 0.95 acre site located to the south of the railway line and north of McClure Street. The land was previously occupied by housing until the Department of the Environment redeveloped as open space in the 1980s. The site was transferred to Belfast City Council by the Department of the Environment in 1987 for the purposes of open space & landscaping. The land was subject to a covenant that restricts use of the lands to landscaping and open space.

In 2003 Belfast City Council considered disposing of the land to BIH Housing Association for £450,000 subject to BIH obtaining planning approval to develop for social housing. This did not proceed and instead the Council declared the site surplus to Council requirements in 2004. The Council then placed the land on the open market to seek expressions of interest to develop the site for social housing.

The two “best offers received” by Belfast City Council were for student accommodation and for a mixed housing scheme. Both offers were considered outside of the terms on which the land had been marketed and the Council agreed that expressions of interest be sought through public advertisement for the development of the site for both social & private housing.

In May 2006 the Council’s Parks & Cemeteries Sub Committee agreed to accept the highest offer following marketing of £3,401,000 by Hagan Homes. One week later the Community & Recreation Committee agreed to refer the matter back to the Parks & Cemeteries Sub Committee to enable Hagan Homes, together with the company which had submitted the second highest bid, Big Picture Ltd to attend a future Committee meeting to present their proposals for high density apartment schemes.

The Parks & Cemeteries Services Sub Committee voted to accept the highest offer from Hagan Homes but the Community & Recreation Committee later agreed to rescind the decision of the Parks & Cemeteries Sub Committee and requested that council officers prepare a report on the future disposal of the land with provision of social housing as the preferred option and that views of the local communities within the area be sought.

The Strategic Policy & Resources Committee was presented with a report on potential disposal of a number of Council assets including the site at McClure Street in June 2008.

Apex Housing submitted a planning application (LA04/2021/2829/F) in December 2021 proposing to construct 1no. social housing wheelchair bungalow, with the removal of plot 01 from approved application LA04/2018/2659/F. 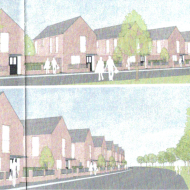 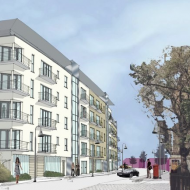