A single-storey red brick building with hipped slate roof and originally a cast iron carriageway door connecting to a three-storey building to the rear of the site. The site was originally the Butter Market and Weigh House in the early 19th century.

The building was converted into a 520 person capacity licensed premises with a large sunken dance floor at first floor level.

The owner of Rain nightclub, Coral Inns (NI) Ltd, entered into administration in August 2012. The nightclub business was placed on the market in 2013 by Osborne King with offers invited by 1st November 2013. The guide price for the leasehold interest (2009 – 2027) was £300,000. By the advertised deadline two formal offers were received however neither proceeded to a formal sale. Instead, the business was sold to a newly incorporated company called Energizinn Ltd and the liquor licence and lease were transferred in May 2015.

Rain closed in January 2014 and, following refurbishment of the premises, T-Street Warehouse opened in April 2014.

A £400,000 refurbishment of the buildings interior took place between August – September 2017 to create a new club that opened in September 2017.

The building was refurbished during autumn 2021 and a new club (Libertine) opened in December 2021. 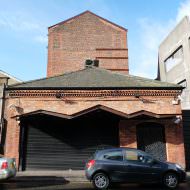