1 – 7 Bedford Street was constructed in 1973 as a five storey precast concrete office building on a two-storey plinth of marble and tinted glass. The building was initially known as Griffin House, later renamed to Causeway House.

Causeway House was placed on the market by agents Hamilton Osborne King in January 2001 as a result of Northern Bank relocated staff to another building. The building was marketed as a six-storey 64,000ft2 office building suitable for major refurbishment or rebuild. The guide price was £5.5m.

The building was purchased during 2001 and a planning application (Z/2001/2879/F) was submitted in November 2001 by D.A Creighton Ltd and Knox & Clayton Architects proposing “alterations and extension to existing building including replacement of facade”. The application was approved in February 2002.

The Department of Culture, Arts & Leisure relocated from the Interpoint Building on York Street to Causeway Exchange in April 2009. The remainder of the building is also occupied by government departments, including the Department of the Environment. 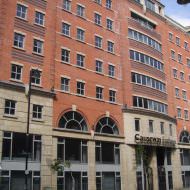