A 4-storey building with attic 5th floor (originally topped with a number of small pediments), designed in Italianate style by David Salmond in 1881. An original ornate doorcase survives at no.13, however a similar doorcase at nos.1-5 was removed in 1977 when the building was subject to refurbishment works.

The building was built in two main sections, both grade B2 listed in June 1992:

Owned by J. Robb & Co. Ltd, silk merchants and wool drapers until the 1930s. The company also owned the adjoining nos. 1 – 15 Castle Place. Originally comprised 2no. ground floor retail units and office space above. The first tenants of the ground floor units were Harbinson & Son jewellers (until 1888) and Leahy & Kelly, wholesale tobacconists. D. Lyle Hall, linen merchants acquired the building (along with 7-19 Royal Avenue) in the late 1920s and leased the ground floor to Prices (Tailors) Ltd from the 1930s until at least the 1960s.

A Spar convenience store opened at the ground floor retail unit in 2011.

A planning application (LA04/2018/0424/F) submitted in February 2018 by Cube (NI) Ltd and McCann Moore Architects proposes to convert the upper floors from office use to 9no. short term serviced apartments. 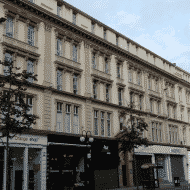 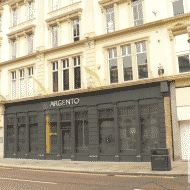